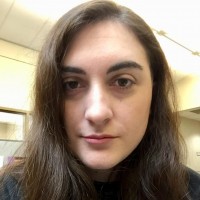 This painting was created around 1410, in the earliest days of the European Renaissance. The realistic people, lush colors, and the extreme attention to detail are all themes that dominated this great artistic period. What had not changed, however, was the love and devotion to Mary. 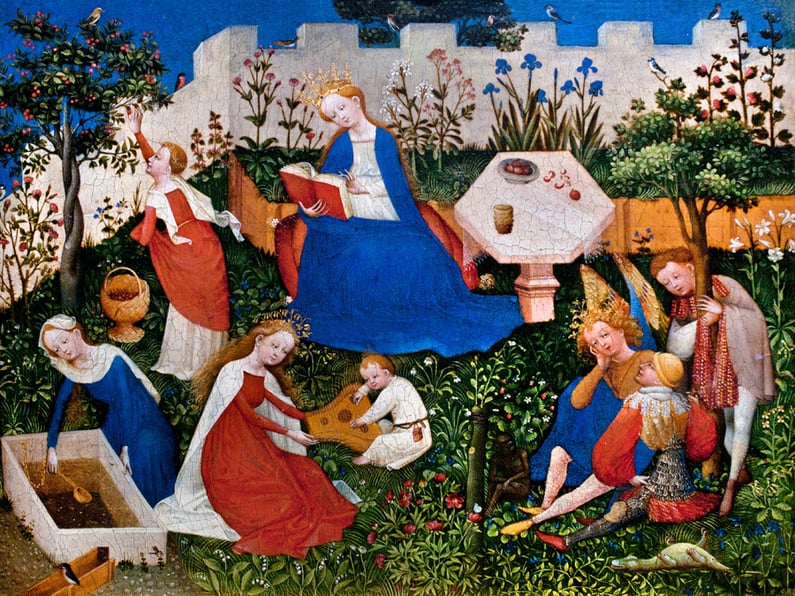 The Virgin Mary is enjoying a day out in her garden, reading a book of prayer. She relaxes on a cushion, her blue cloak draped over her knees; this is Our Lady of Modesty. Despite the crown she wears as Queen of Heaven, Mary is not sitting on a throne, but relaxes on the ground so that she may be nearer to mankind. By doing this Mary is inviting us into the garden with her.

Since few people could read, artists used symbols and common themes in their artwork. In this painting alone there are dozens of hidden messages, including some that have been forgotten over time. Mary sits beside a table with a plate of apples and pitcher of water. This is a direct reference to Adam and Eve and the Forbidden Fruit. But Mary was conceived without sin, and so the apple on the table is just a simple fruit.

Beneath Mary, baby Jesus plays a musical instrument with a female saint. Jesus has a coin purse at His waist, referring to the thirty pieces of silver that would seal His fate. The woman beside Him could either be St. Catherine of Alexandria or St. Cecilia.

St. Catherine was a princess (she wears a crown) who converted thousands of people in her short life. She died a martyr proclaiming that her only husband was Christ. The woman could also be St. Cecilia, the patron saint of music. She was also martyred for her faith and was usually depicted with a musical instrument.

To the right of Jesus sit three men. The Archangel Gabriel, identified by his wings and crown, relaxes in the shade with St. Sebastian and St. George. The small, grumpy-looking creature by Gabriel’s feet is the devil, now defeated and powerless. Also sitting on the ground is St. George, identified by the armor he wears. He also defeated the devil, here a tiny dragon on the grass. Standing with them is St. Sebastian, his pose mimicking his martyrdom of being tied to a tree and shot with arrows. But here in the garden all are relaxed and free from pain or sorrow.

On the left side of the garden is St. Dorothy. She is picking cherries from a tree, a fruit associated with the Crucifixion because of its tart flavor and red juice. When St. Dorothy was captured, the heathen King demanded she prove her connection to Christ. It was then her hat became filled with fresh fruit. An extremely popular saint during the Middle Ages, she is less well known today.

We know even less about the last woman in the painting. The female saint, who is ladling water from a well, has been lost to time. She could be St. Barbara, another popular medieval saint, but there are no recognizable symbols that tell us her identity.

Lastly, we look at the garden itself, and the many wildflowers that grow in it. Flowers were extremely important because of their association to the Virgin Mary. For this reason, the artist painted the garden as accurately as possible. There are over twenty identifiable flowers and plants, including Iris’s, lilies, oxeye daisies, violets, and roses. There are also several different songbirds, including a goldfinch, oriole, and a robin. And this painting is only ten inches tall!

Lastly, another reminder of Mary’s purity is the walled garden itself. Since the earliest days of Christianity, Mary has been understood to be the New Eve, correcting the mistakes made by Adam and Eve. The walled garden is in fact a miniature Eden; shielded forever from the sins of the outside world Mary invites us all to join her.