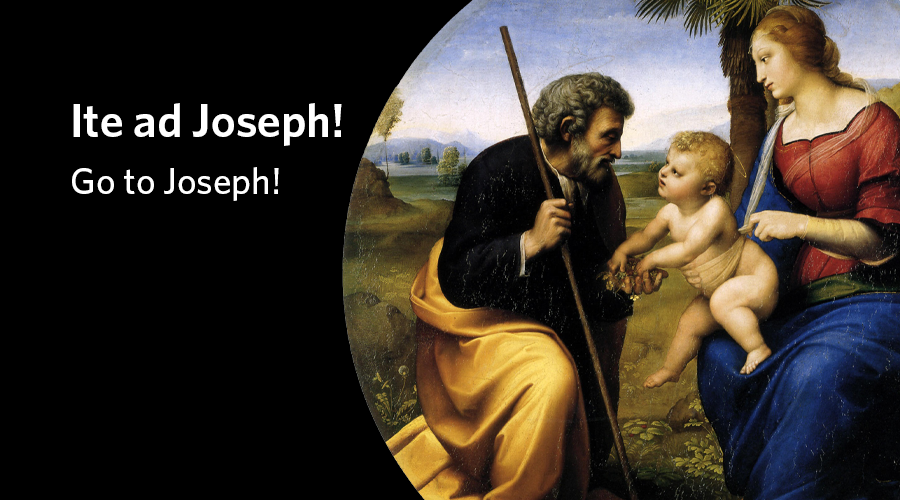 A Special Video Message from Father Willy Raymond, C.S.C., on the Feast of Saint Joseph

ITE AD JOSEPH! GO TO JOSEPH! History and Pope Francis have infused these three words with layers of significance. Francis declared 2021 the year of Joseph. March is the month of Joseph, and in particular March 19, we keep a solemn festival in honor of Saint Joseph.

This is not your average Joe. He follows a Patriarch Joseph sold into slavery by his jealous brothers. Joseph attracted Egypt’s Pharaoh because he interpreted dreams, and became the Chief Minister of the King, storing up grain against the coming famine.

When Joseph’s brothers come to Pharaoh seeking grain to avoid starvation, the King says, “Go to Joseph.” It all ends well when Joseph forgives his brothers and embraces them saying, “I am Joseph, your Brother.”

But the Joseph we honor today stands apart. The Eternal Father chose him out of all men of every age and place to be the Guardian, Protector and Earthly Foster Father of the Lord Jesus. What a singular mission and responsibility!

Like the earlier Joseph, this Joseph trades in dreams. But he is not an idle dreamer. Joseph’s dreams come bearing God’s challenging mission not only to protect, guard, rear, educate, train, provide for and love Jesus but also to be the loving husband of Mary, the Mother of God, and to be the head of the household of the Holy Family.

But here is what I hope to share with you. Joseph is a model of how to love generously, humanly, fully.

Pope Francis says the chastity of St. Joseph is “The summation of an attitude that is the opposite of possessiveness. Chastity is freedom from possessiveness in every sphere of life. Only when love is chaste is it truly love. He never made himself the center of things. He did not think of himself; but focused instead on Mary and Jesus.” He reminds us that “fathers are not born but made.

A man does not become a father simply by bringing a child into the world, but by taking up the responsibility to care for that child. Whenever a man takes responsibility for the life of another, in some way he becomes a father to that person.” {Patris Corde}

The name “Joseph” means “increase.” His fatherhood was directed totally to helping Jesus grow according to his humanity, and Joseph wants to help Jesus grow in all of us. The sure path to making that happen is through growing in devotion to St. Joseph, since Joseph’s whole life points to Jesus.

So, Friends, Go to Joseph! You won’t regret it.