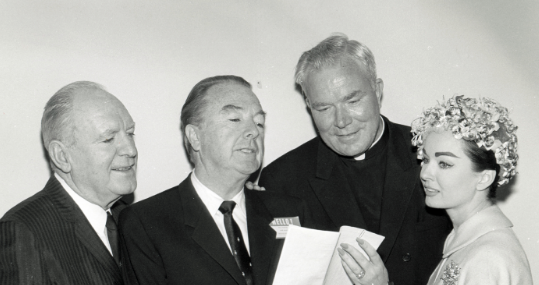 Prayer Never Knows Defeat: The Legacy of a Man of God

We are pleased to share the following article from The Catholic Voice, a publication of the Diocese of Oakland, California.

Family prayer ministry hopes to be ‘beacon of hope’

By Al Donner
Special to The Catholic Voice

Although Jesus was a manual worker from an obscure village 2,000 years ago, his message transformed much of the world and his impact continues today in contemporary society.

Today some contemporary evangelists have learned how to effectively use mass media and clear messages to bring Christ to people in modern societies.

Rev. Patrick Peyton, CSC, was one. A poor Irish immigrant, he became a powerful influence on millions by convincing people to pray the rosary. His clear message was that “The family that prays together stays together.”

Father Peyton’s successors continue that outreach to millions, as Rev. Willy Raymond, CSC, emphasized as the Catholics at Work online speaker in January.

Father Raymond is president of Holy Cross Family Ministries, which last December released a movie about Father Peyton’s life and ministry as he proceeds toward canonization, “Pray: The Story of Patrick Peyton.” (praythefilm.com).

Father Peyton’s efforts were dramatic and successful, helping millions of families to embrace prayer as a vehicle to maintain strong families and to strength their faith.

Father Peyton arrived as a penniless immigrant from Ireland in 1928. Eventually he became a janitor in a cathedral, a job that led him toward the priesthood. But when he was stricken with terminal tuberculosis, he turned to prayer. His fervent prayers brought recovery and, after ordination, a life’s mission to make confident prayer a core part of family life.

“The one who is holy is happy,” Father Peyton often emphasized. “Prayer never knows defeat.”

Today the Holy Cross family ministry has the same focus as when it began, Father Raymond emphasized to an active prayer ministry in 17 countries.

“We hope to be a beacon of hope for families,” Father Raymond said.

Release of the film launched a new “Pray Together Now” movement that seems especially relevant in the world’s current state of uncertainty and fear of the COVID-19 pandemic.

Catholics at Work is a ministry of the Oakland diocese that has brought 168 speakers into the diocese in the last 19 years. It is open to all. While in the past its programs have been morning or evening in-person presentations, currently speakers are presented online through Zoom links. More information can be found at www.catholicsatwork.org

For this and many other stories go to: The Catholic Voice - News from Around the Diocese (catholicvoiceoakland.org)